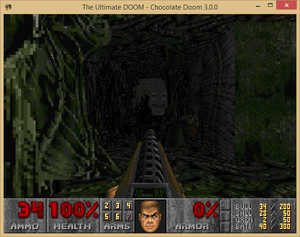 Chocolate Doom running Aliens TC, one of the earliest and most well-known total conversions created for Doom.

1998 saw the public release of the Doom source code by its original authors, id Software. Since then, a large number of Doom "source ports" have been created by programmers, who have extended the code, adding new features and removing some of the limitations of DOS Doom (now commonly referred to as "Vanilla Doom" by fans). These efforts should be commended, and many of the modern Doom source ports are truly impressive pieces of work.

Chocolate Doom takes a different approach to other source ports. Its aim is to accurately reproduce the experience of playing Vanilla Doom. It is a conservative, historically accurate Doom source port, which is compatible with the thousands of mods and levels that were made before the Doom source code was released. Rather than flashy new graphics, Chocolate Doom's main features are its accurate reproduction of the game as it was played in the 1990s. The project is developed around a carefully-considered philosophy that intentionally restricts which features may be added (and rejects any that affect gameplay).

Originally just a port of the Doom source code, the project has grown to include ports of Heretic, Hexen and Strife, other commercial games that were based on the Doom engine.

The source code to Chocolate Doom is Free Software under the GNU General Public License, and is portable to a variety of different operating systems. It therefore preserves the gameplay of the original game for modern computers, many of which are now unable to run the original.

Chocolate Doom is written by Simon Howard, with extensive help from many other people who have provided patches, bug reports and suggestions.

Chocolate Strife was developed by James Haley and Samuel Villarreal as part of a painstaking reverse engineering project (read more about this).

The Chocolate Doom icon (as shown at the top left of this page) is based on a photo of an icecream by Chris Metcalf.

For more information on this article, visit the Chocolate Doom page on the Doom Wiki.
Retrieved from "http://www.chocolate-doom.org/wiki/index.php?title=About&oldid=2493"