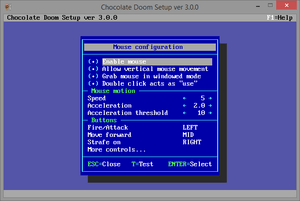 The Mouse Configuration window allows you to change many settings for mouse control in Chocolate Doom.

The Enable mouse toggle should explain itself: if you toggle it off, the mouse cannot be used at all to control the game, leaving you with keyboard or gamepad control only.

The Allow vertical mouse movement toggle determines whether the mouse may be used to move the player forward and backward. This is primarily useful for trackball players, the type of device John Romero played the game with when it was new. Toggling this off has the same effect as using the novert program for DOS with the original games: the mouse's movement only affects turning left and right, and not moving forward and backward.

The Grab mouse in windowed mode toggle changes whether the mouse can escape the game window when not in fullscreen mode. Turning this off probably makes the game very difficult to play, but can facilitate switching to other applications much more easily.

The Double click acts as "use" toggle determines whether double-clicking the secondary mouse button is the same as pressing the use key (for opening doors, pressing switches, et al).

When you are playing an FPS, you sometimes want precise aiming, and sometimes want to make large movements. If a monster started shooting at you from behind, you would want to move the mouse fast to turn round quickly, for example. The problem is that these are conflicting requirements: you could increase the mouse speed to allow yourself to make quick turns with a small movement of the mouse, but then you would lose the precision you need to do precise aiming.

The setup tool has an option to help you configure the threshold and acceleration to your comfort. If you go into the "configure mouse" dialog, there is a button to test your settings at the bottom of the window. It launches Doom and shows a thermometer-type bar that shows how fast you are moving the mouse. There is a vertical bar that shows the acceleration threshold, so that you can see when you're exceeding it. 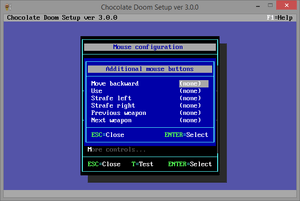 You may also configure what the particular buttons do. In the original games, most mice did not exceed three buttons (and scroll wheels were not a thing yet), so the controls on the mouse where fairly simplistic. Chocolate Doom expands on these capabilities by allowing you to bind additional controls, either to the same primary two or three buttons, but to many more if your mouse supports them. The scroll wheel directions count as two separate buttons, and may be used themselves, including previous and next weapon controls.

You may use the Test option to test your changes in-game, without making the configuration permanent first.