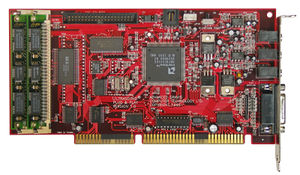 The Gravis Ultrasound (GUS) was a series of sound cards popular in the '90s for gaming. While slightly more expensive than the Soundblaster and its clones, the GUS provided superior music playback, with wavetable synthesis. Doom was one of several games that included GUS playback support.

Chocolate Doom includes a GUS "pseudo-emulation" support. An actual GUS is not emulated, but Timidity is used to play back music using a configuration file generated from the DMXGUS lump. This means that the music should sound similar to the music played back from an actual GUS card.

Using the GUS feature requires downloading the GUS patch files: these are the samples used to reproduce each MIDI instrument, which were originally distributed with the GUS driver files. Once extracted, the path to the files can be specified in the setup tool.

A setup guide for how to configure GUS music playback can be found in the README.Music file included with Chocolate Doom releases.

Vanilla Doom has a bug where it will play wrong instruments when using a GUS. In keeping with the project philosophy, Chocolate Doom faithfully emulates this bug, but some people find it sounds unpleasant.

For more information on this article, visit the GUS instrument mappings bug page on the Doom Wiki.

There are two ways to work around this bug.

The WAD gusgonna.wad contains a workaround/fix for the bug. Using this WAD does have a disadvantage in that it must be loaded every time the game is run.

Use GUS patches without GUS emulation[edit]

It is possible instead to play with the GUS patches without using Chocolate Doom's GUS emulation. To do this: