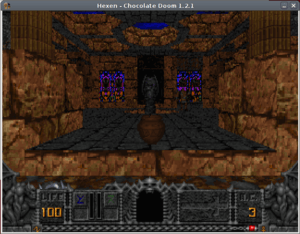 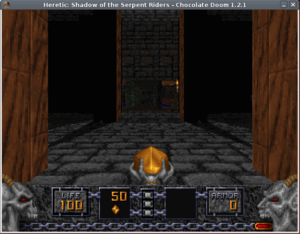 The branch is now obsolete: v2-branch followed on from raven-branch, integrating the work that was done in parallel on strife-branch.

To support the games, radical restructuring of the Chocolate Doom source code was necessary. The purpose of this was to separate the existing code into common and Doom-specific parts. The Heretic and Hexen code were then updated to interface with the common code.

The approach taken by Chocolate Doom differs from the common approach taken by other ports to support Heretic and Hexen. For example, ZDoom and Eternity have taken the approach of creating a combined engine that is generic enough to support all games. This approach reduces code duplication. However, Chocolate Doom's goals are to preserve the behavior of the original games as closely as possible. To achieve this, the source code to the three games is maintained separately, depending only on some common code that is shared between them. This approach results in duplicated code, with the advantage of avoiding large changes that might affect compatibility.

The portions of code that are common to the three games are currently:

raven-branch is now obsolete. Version 2.0 of Chocolate Doom integrated the changes made on raven-branch and now includes support for Heretic and Hexen.