For more information on this article, visit the Marshmallow Doom page on the Doom Wiki. 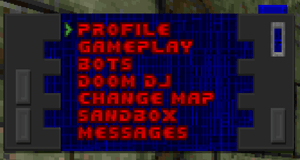 The datapad gives the player quick access to many powerful options

Most of what Marshmallow Doom has to offer can be accessed on the player's datapad. Some features on the datapad include: 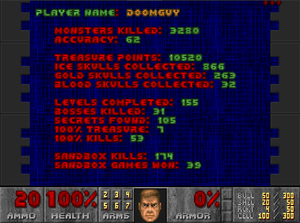 Various player-specific statistics are stored in a persistent player profile that is saved to disk. Stats are only saved when a level is completed organically without cheating. Cheating or level skips will cause any stats earnings to be discarded.

A few statistics tracked by the player profile: 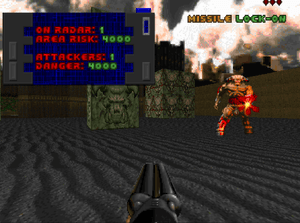 The PKE meter reports a high danger level in E2M8

The datapad features a PKE Meter app which reports both potential and immediate danger:

Danger level is also reported by the PKE Widget which can be seen in the upper right corner of the screen. Danger is represented as a five star rating, where five stars represents the highest level of danger.

Some of Marshmallow Doom's new features such as bot commands and player inventory have added new keyboard functionality to the game. Most of these new keyboard controls can be found throughout this document, or you may reference them while in-game using the new keyboard reference screen.

Doom's vanilla cooperative experience can quickly become frustrating as it is missing many crucial features which are easily taken for granted today. Multiplayer features from other games like Quake and other Doom source ports have been backported into the classic Doom experience, such as:

Blood and gore mechanics have been redesigned to behave similarly to that of Doom's contemporaries such as Rise of the Triad and Duke Nukem 3D. Four gore modes are offered:

New control points for monster difficulty are offered for a greater challenge, and are especially useful for balancing cooperative play:

Upgrading can also be enabled at the command line by using -upgrade <x>, where x is probability ranging from 1-9.

Some subtle tweaks to monster attributes and behaviors are available. A few examples:

Early design plans for Doom included having the player collect treasure items for points much like id's previous hit title, Wolfenstein 3D, but game elements such as points and lives were ultimately discarded from the game's design, leading these treasure items to be converted into what we now know as Doom's health and armor bonuses.

If the Saved Items option is enabled, the following items can be stored in the player's inventory for later use:

When killed during cooperative play, the player can run back to their corpse to retrieve their saved items, weapons, and ammo. Only the player who dropped the backpack can pick it up, and if the player dies multiple times, multiple backpacks will be available for retrieval at each player corpse.

In real network cooperative games, players can drop ammo for friends by pressing 'G'. Ammo is deducted from the player dropping the backpack, and when ammo is low enough, dropping a backpack is not possible until more ammo is found.

When using option -warp at the command line, the player will spawn with an arsenal of weapons estimated to be those found up to that point in the game, in addition to a small helping of ammo.

Any classic Doom map can be revitalized by repopulating it with different item pickups. Two modes of randomized item pickup replacement are offered:

Sandbox mode allows the player to design their own monster hordes in an empty map. In real network games, all players can place monsters throughout the map.

After starting a sandbox game, scroll through a list of monsters available by pressing the square brackets '[' and ']', and to spawn an enemy, press backslash '\'. When ready to start the battle, press 'B'. All monsters placed in sandbox mode will not become active until the battle begins.

New event messages keep the player informed of important events during the game. The message categories shown to the player can be customized using the HUD menu. A few examples include:

Other useful information is available on the HUD such as:

A few of Doom's original item pickups have been repurposed for use by a handful of new items:

Other new gameplay features include:

Bobby Prince's original soundtrack from Doom can be brought to life using the new Doom DJ feature. Doom DJ varies the mood of the music playing based on the amount of danger the player is experiencing in real-time.

Music from both Doom and Doom II can be used simultaneously while playing either game when using the WAD stealing option (see below.)

The datapad offers a handful of options for tweaking the dynamic music system:

Up to three AI-controlled bots are available for cooperative or deathmatch play. Bots can be added at any time while playing a single-player game, and when spawned, they will run to meet the player at his current position in the map. They will primarily follow the player's lead through the level, and if separated will attempt to regroup to the player's position if possible.

Press 'F' to order the bots to follow you.

Press 'T' to assign a target to the bots.

Press the use key while facing a bot to cycle through a single bot's orders/behaviors.

Press and hold the use key to activate the squad command menu.

Press and hold 'Shift' to make the bots sprint. This will also make the bots move in close to the player; useful for crowding into elevators/lifts or moving the bots out of the way when blocked.

Wad stealing allows both Doom and Doom II assets (music, sprites, etc.) to be used at once for a richer Doom experience. The dynamic music and sandbox features make the most use of wad stealing, as music from both games can be used at once and sandbox games in Doom maps can use Doom II monsters.

The super shotgun is also available in Doom, however this is also possible with Crispy Doom.

When the game is first started, the user will be prompted to import the other game's wad file if the IWAD file is detected in the Marshmallow Doom directory.

Wad stealing can also be enabled from the command line:

Settings from server.cfg are only loaded when playing real network games or when using the -solo-net command-line option. The game does not write any changes to server.cfg as this file is only intended to be altered manually using a text editor.

When not playing real network games and not using -solo-net, all preferences are saved to marshmallow.cfg.

Marshmallow Doom simplifies most common command-line parameters to make launching the game quicker and easier. The following are command-line examples:

Doom DJ is inspired by iMuse, the dynamic music system heard in many classic Lucasarts games such as X-Wing, Tie Fighter, and Dark Forces.

Usage of the phrase "ludicrous gibs" is a tribute to Apogee Software's Rise of the Triad and their infamous Developers of Incredible Power.

Old-fashioned game elements such as collecting treasure, scoring, and player inventory are part of an attempt to recreate what Tom Hall's influence on Doom might have been had he stayed through the end of development.