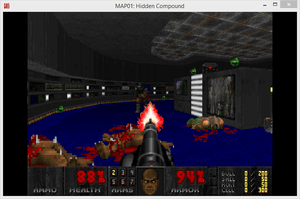 Doom Retro being played with the Rowdy Rudy's Revenge! WAD, version shown is 3.4

Doom Retro is a fork of Chocolate Doom with enhancements from other Doom source ports that aims for a "classic, refined Doom source port". The port, that was made for the Windows OS, saw its first release on 2013-12-10 by Brad Harding to coincide with Doom's 20th anniversary.

Unlike Chocolate Doom, that can be said to be a more conservative port, Doom Retro adds features that were not seen in the original release of Doom in 1993 nor its Chocolate counterpart. Some of the new features and enhancements that it adds are;

One of the downsides to using this port is that currently, it only supports singleplayer and not multiplayer, along with this, in order to freely implement certain features, and due to the nature of them, Doom demo recordings and playback has been disabled.

For more information on this article, visit the Doom Retro page on the Doom Wiki.
Retrieved from "http://www.chocolate-doom.org/wiki/index.php?title=Doom_Retro&oldid=3004"
Category: