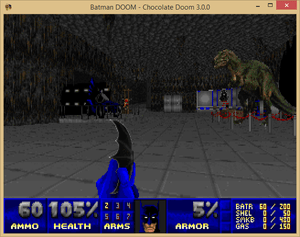 Batman Doom, a TC which makes heavy use of dehacked, playing under Chocolate Doom.

For more information on this article, visit the DeHackEd page on the Doom Wiki.

Chocolate Doom's dehacked support is entirely new code. It is closer in behavior to the original dehacked than the dehacked engines in other ports. It is also stricter in what it accepts as valid input. For example, in DOS dehacked the lengths of string and cheat replacements are limited by the layout of the Vanilla Doom executables. Chocolate Doom imposes the same limits.