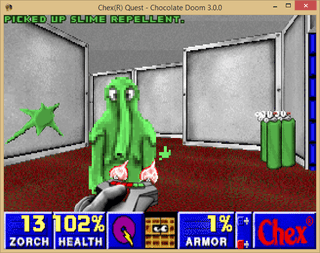 For more information on this article, visit the Chex Quest page on the Doom Wiki.

Chocolate Doom has full support for Chex Quest, including demo compatibility. The game is from a promotional CD-ROM included in boxes of Chex cereal in 1996. Although based on Doom, some concepts in the game were changed to make it more friendly for children. For example, the weapons do not kill the monsters; instead, they "send them to a parallel dimension".

To play Chex Quest in Chocolate Doom, follow these steps:

Chocolate Doom does not have all necessary data included in the engine itself to emulate the original chex.exe. Instead, as many as possible of the Chex-specific changes are stored in a separate dehacked patch. This is for the following reasons: