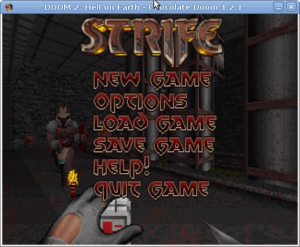 strife-branch is a branch of Chocolate Doom that developed support for Strife. strife-branch was derived from raven-branch and developed by Quasar and Kaiser (author of SvStrife).

Unlike the case of raven-branch, where the source code to Heretic and Hexen has been published under the GNU GPL, the Strife source code has never been publically released; indeed, the source code itself appears to have been lost by the developers, and Rogue, the company that originally developed Strife, no longer exists. The Strife binaries were therefore reverse engineered to develop an accurate source port. This presented both technical and legal obstacles to development.

The branch is now obsolete and remaining Strife work was completed on v2-branch.

The following video shows strife-branch at revision 2075; a lot of functionality was incomplete at that point and many improvements have been made since then: