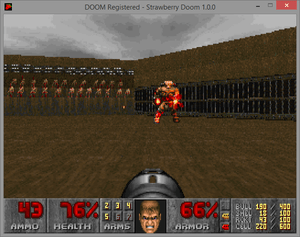 Latest version of the port from March 2008 being played with YakWorld.

Strawberry Doom is a fork of the Chocolate Doom codebase that extends some of the limits of Chocolate Doom to match some of those of PrBoom+, as well as adding features such as playable bots, despite of this, the port now seems to be defunct, as it was last updated in March of 2008 and never actually saw an official release by the head developer, GhostlyDeath (who is now known as RestlessRodent), only playable demos were released via the project's SourceForge page.

It featured extended limits as per Doom plus, in-game multiplayer scoreboard which also shows player health and armor information, enhanced and color contextualized automap (which was also copied into ReMooD, a port that GhostlyDeath would soon work on a few months later), primitive bots with primitive navigation for any level, and deathmatch team support.

For more information on this article, visit the Strawberry Doom page on the Doom Wiki.
Retrieved from "http://www.chocolate-doom.org/wiki/index.php?title=Strawberry_Doom&oldid=3089"